Come along with us as we renovate our 1946 home. This week’s home renovation update is the bathroom.

It has been quite a while since my last home renovation post, but that doesn’t mean we haven’t been working on it. A lot has been going on since the last post. Our main focus right now is the bathroom.

This room has given us a lot of trouble and I really hope the rest of the house goes smoother than this. Nothing in the bathroom was level or straight.

The floor in the bathroom was sagging in one spot so we had to add sister joists under the floor to level it. That was quite hard since the joists are heavy and we had to stand on ladders holding the joists up while my husband clamped them down. Then he had to screw them in to get them to stay. It fixed the problem, at least.

All of the plumbing and electrical also had to be replaced. When I moved into this house there was no electrical outlet in the bathroom. How in the world did the Mrs. dry her hair? The more we tear apart in this house the more I wonder what they were thinking when it was built.

Here’s the first part of the photos in the bathroom renovation. I’ll share more next week because I don’t want to overwhelm you with a really long post.

Our Home Renovation – The Bathroom Part 2

Here is a photo of adding the sister joists as I mentioned before. These joists are pretty long, so my husband and I were on ladders on each end to put it up. Then he would clamp one end, then the other to get them to go together. Most of the time he had to hammer them really hard to get the board to move at all. This was a pretty tough process.

Luckily we had enough room to work since we have a basement and it wasn’t directly under the house.

Smaller boards were added going across for extra protection.

As I mentioned all the electrical had to be replaced in the bathroom. New wires had to be run for a new outlet, plus new wires going to the heat and the light switch. (We have ceiling heat, which I actually love.)

Next, we removed the old bathtub.

I have to admit, I was a little worried about this part. I was terrified of what was behind the wall and under the tub. Luckily it wasn’t as bad as I thought. It was gross, but I was expecting way worse.

After the tub was removed we had easier access to the wall, which also came down.

The linen closet doors were removed, shelves taken out, and boards torn out.

We also tore up and removed the entire floor. There were layers and layers of flooring!

The last layer was this red vinyl floor which was pretty retro.

We had to be extra careful walking around in there or we’d end up in the basement!

New boards were laid for the floor.

Of course, all the plumbing in the bathroom had to be replaced, too. That took quite a while to do, but luckily my husband has Sketchup so he was able to plan everything out in detail before starting. This was a huge help so no mistakes were made costing us more money and time.

New pipes were put up for the sink, toilet, and bathtub/shower.

That’s all for this week! I still have more to share and it’s coming along rather quickly now.

I hope you’ll join me next week for more home renovation updates! 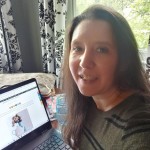 Michelle is a stay-at-home homeschool mom who loves DIYs and living a frugal lifestyle.

Sign up for weekly inspiration sent right to your inbox.

How to Paint Windows Like a Pro – Home Renovation Update #9

I love to hear from you! Cancel reply

This site uses Akismet to reduce spam. Learn how your comment data is processed.

Sign up for my free weekly newsletter to get DIY inspiration and frugal home tips sent right to your inbox!

I'm so glad you're here! This is where you'll find household and frugal living tips to make your life easier. You'll also find some great DIY's & crafts and ways to have a natural living lifestyle.